In just over two years from its launch, the UK’s Green Investment Bank has ­invested £1.8 billion in 41 projects around the country. These are large sums, but still far from what is really needed to decarbonise the economy. Some observers say the green bank isn’t yet fulfilling its potential, for various reasons, among which the fact it can’t borrow in order to bring more money into the sector.

But the bank must be doing something right. Apparently there are now plans, at different stages of development, to launch similar ­institutions in seven countries across three continents. In the United States alone, projects to set up green banks are in place in six states. Or at least this is what the bank’s officials told me when I recently interviewed the head of investment banking there, Edward Northam, for Sun & Wind Energy magazine.

Northam explained the organisation’s offshore wind strategy: this sector has ­taken just under half of the bank’s existing investment, while the rest has gone to bioenergy, energy efficiency and energy from waste. He is now working (first close is apparently imminent) on the new offshore wind investment fund, which the banks says is the first of its kind in the world.

The idea behind this new fund is that new sources of capital for offshore wind could become available (with potential implications for other parts of the ­renewable sector). This is important because if we want to achieve rapid growth of renewables to meet global climate change targets, these technologies need to be deployed much faster. In particular, while there is plenty of money moving around the world and investors looking for good returns, the portion of investment going to renewable energy and energy efficiency needs to grow.

The hope is that the bank, through its new fund, will soon be able to offer “equity stakes” (or shares) in operational wind farms as a good opportunity for ­investors seeking long-term, inflation-linked ­returns, including long-term infrastructure investors such as sovereign wealth funds and pension funds. These are currently sitting on very large sums of money and if they started to invest more heavily in renewables it could make all the difference in the world.

Read the rest of the Q&A with Edward Northam here.

At my son’s primary school in North London we have all the basic conditions needed to kick-start a solar photovoltaic panel project. It’s not always easy, but we are getting through the first hurdles and have made progress with fundraising.

As I mentioned in my previous blog post, we have a promising combination of enthusiastic parents and staff. When I first raised the prospect of installing solar panels with the Parent School Association (PSA), many were keen to help and get the children involved in educational and fundraising activities on the ‘solar’ theme. We meanwhile heard governors are supportive, too.

Read the rest on the Friends of the Earth website.

It was with a bit of trepidation that I started to read Jeremy Leggett’s most recent book, The Energy of Nations: Risk Blindness and the Road to Renaissance (Routledge, 2013). Last time I read one of Leggett’s books – The Carbon Wars – it had such an impact on me that it contributed heavily to my decision to leave a promising job as a financial journalist to pursue a fascinating but less linear career in climate change policy. END_OF_DOCUMENT_TOKEN_TO_BE_REPLACED

There is a big effort going on at the moment in the UK to get schools to install solar photovoltaic (PV) panels. Campaign group 10:10 has been running a successful project called Solar Schools. Friends of the Earth recently launched its “Run on Sun” campaign, aimed at making it easier for schools to do this. 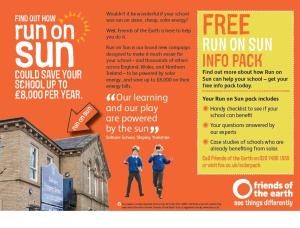 END_OF_DOCUMENT_TOKEN_TO_BE_REPLACED

Don’t believe what you read in the newspapers or see on TV – the elections for the European Parliament really are important.

The European Parliament has real power, as one of the two pillars of decision making on EU laws (the other being elected governments). Yes, the European Commission proposes laws, but it is the parliament and EU governments who decide what happens.

Do EU laws matter? Can the parliament make a difference? Yes in both cases.